Linda Heim knew her dad didn’t plan to wait for the cancer to kill him. For decades, he’d lived in Montana, which they’d thought was one of the few places where terminally ill people could get a prescription to end their life.

This story also ran on Time. It can be republished for free.

After two years of being sick, Heim’s dad got the diagnosis in 2019: stage 4 kidney cancer. His physician offered treatments that might extend his life by months. Instead, the 81-year-old asked the doctor for help dying. Heim said her parents left the appointment in their hometown of Billings with two takeaways: The legality of medically assisted death was questionable in Montana, and her father’s physician didn’t seem willing to risk his career to put that question to the test.

“My parents knew when they left there that was the end of that conversation,” said Heim, now 54. “My dad was upset and mad.”

The day after the appointment, Heim’s mother went grocery shopping. While she was gone, Heim’s dad went to the backyard and fatally shot himself. (Heim asked that her father’s name not be published due to the lingering stigma of suicide.)

About a decade earlier, in 2009, the Montana Supreme Court had, in theory, cracked open the door to sanctioned medically assisted death. The court ruled physicians could use a dying patient’s consent as a defense if charged with homicide for prescribing life-ending medication.

However, the ruling sidestepped whether terminally ill patients have a constitutional right to that aid. Whether that case made aid in dying legal in Montana has been debated ever since. “There is just no right to medical aid in dying in Montana, at least no right a patient can rely on, like in the other states,” said former state Supreme Court Justice Jim Nelson. “Every time a physician does it, the physician rolls the dice.”

Every session of the biennial Montana state legislature since then, a lawmaker has proposed a bill to formally criminalize physician-assisted death. Those who back the bills say the aid is morally wrong while opponents say criminalizing the practice would be a backstep for patients’ rights. But so far, lawmakers haven’t gained enough support to pass any legislation on the issue, though it has been close. The latest effort stalled on March 1, on a split vote.

Even the terminology to describe the practice is disputed. Some say it’s “suicide” anytime someone intentionally ends their life. Others say it’s “death with dignity” when choosing to expedite a painful end. Such debates have gone on for decades. But Montana remains the sole state stuck in a legal gray zone, even if the practice can still seem taboo in many states with clear laws. Such continued uncertainty makes it especially hard for Montana patients like Heim’s dad and their doctors to navigate what’s allowed.

“Doctors are risk-averse,” said Dr. David Orentlicher, director of the health law program at the University of Nevada-Las Vegas, who helped write clinical aid-in-dying guidelines published in the Journal of Palliative Medicine in 2016. “The fear of being sued or prosecuted is still there.”

Despite that, access to medical aid in dying is gaining momentum across the U.S. Outside Montana, eight states and the District of Columbia allow the life-ending aid — six of them since 2014. So far in 2021, legislators in at least 19 states have pushed aid-in-dying bills, most seeking to legalize the practice and some seeking to drop barriers to existing aid such as expanding which medical professionals can offer it. Many are repeat legalization efforts with some, like in New York, dating as far back as 1995. Only the Montana bill this year specifically sought to criminalize it.

North Dakota considered legislation to legalize medically assisted death for the first time. Rep. Pamela Anderson, a Democrat from Fargo who proposed the measure after hearing from a cancer patient, said she wasn’t surprised when the bill failed in February in a 9-85 vote. The state’s medical association said it was “incompatible with the physician’s role as healer.” Angry voters called Anderson asking why she wanted to kill people.

“But I heard from just as many people that this was a good bill,” Anderson said. “There is momentum to not let this concept go away.”

Back in Montana, now retired state Supreme Court Justice Nelson said he has always regretted joining the majority in the case that allowed the practice because the narrow ruling focused on physicians’ legal defense, not patients’ rights. Having watched a friend die slowly from disease, Nelson, 77, wants the choice himself if ever needed.

Despite — or because of — the court decision, some Montana doctors do today feel that they can accommodate such patient decisions. For example, Dr. Colette Kirchhoff, a hospice and palliative care physician, said until she retired from private practice last year she considered patients’ requests for life-ending drugs.

Physicians who help in such cases follow well-established guidelines set by other states, Kirchhoff said. A patient must have six months or less to live — a fact corroborated by a second physician; can’t be clinically depressed; needs to ask for the aid; and be an adult capable of making health care decisions, which is determined by the attending physician. They must also administer the life-ending medication themselves.

“You’re obviously not going to do a case that is vague or nebulous or has family discord,” Kirchhoff said. “The doctors who are prescribing have felt comfortable and that they’re doing the right thing for their patient, alleviating their suffering.” Of her few patients who qualified for a prescription, she said, none actually took the drugs. Kirchhoff noted that, in some cases, getting the prescription seemed to provide comfort to her patients — it was enough knowing they had the option if their illness became unbearable.

For the past six legislative sessions — dating to 2011 — a Montana lawmaker has proposed a bill to clarify that state law doesn’t allow physician-assisted death. Republican Sen. Carl Glimm picked up that effort the past two sessions. Glimm said the current status, based on the more than decade-old court decision, sends a mixed message in a state that the Centers for Disease Control and Prevention ranks as having among the nation’s highest suicide rates. Glimm said allowing someone to end their life because of pain from a terminal illness could normalize suicide for people living with depression, which is also a form of pain.

“It’s really hard because I do sympathize with them,” Glimm said. “What it boils down to is, if you’re going to take your own life, then that’s suicide.”

Kim Callinan, president and CEO of national nonprofit Compassion & Choices, said the comparison to suicide is frustrating. “People who are seeking medical aid in dying want to live, but they are stricken with a life-ending illness,” she said.

Glimm and his bill’s supporters say that some patients could be pressured into it by family members with something to gain, and doctors could prescribe it more often than they should.

But Callinan, whose group advocates for aid in dying, said that since Oregon first legalized it in 1997, no data has shown any merit to the warnings about abuse and coercion. One study showed no evidence of heightened risk of abuse within the practice for vulnerable populations such as the elderly. But critics have said states aren’t doing enough to track the issue. 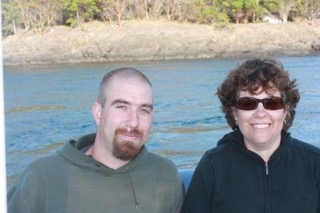 By now, Leslie Mutchler, 60, knows most of the people on all sides of the debate after years of testifying in support of protecting aid in dying. Her dad, Bob Baxter, was a plaintiff in the case that eventually led to the 2009 Montana Supreme Court decision on medically assisted death. After leukemia whittled his body for years, he died in 2008 without the option, the same day a lower court ruled in his favor.

Mutchler said she didn’t understand how complicated the Supreme Court’s ultimate ruling was until her son TJ was diagnosed with terminal metastatic pancreatic cancer in 2016.

He was 36 and lived in Billings, Montana. By then, the 6-foot-5 man had lost 125 pounds off what had been a 240-pound frame. He couldn’t keep food down and needed a feeding tube for medicine and water. TJ Mutchler wanted to have the choice his grandfather never got. But when he went to his physician and asked for aid in dying, the response was it wasn’t legal. Eventually, Mutchler found a doctor to evaluate her son and write the prescriptions for phenobarbital and amitriptyline. TJ took the drugs more than two months later and died.

“People contact me asking how to find someone and it’s difficult,” Mutchler said. “That’s why people end up taking matters into their own hands.” Research into terminally ill populations is limited, but one national study published in 2019 found the risk of someone with cancer taking their own life is four times higher than the general population. 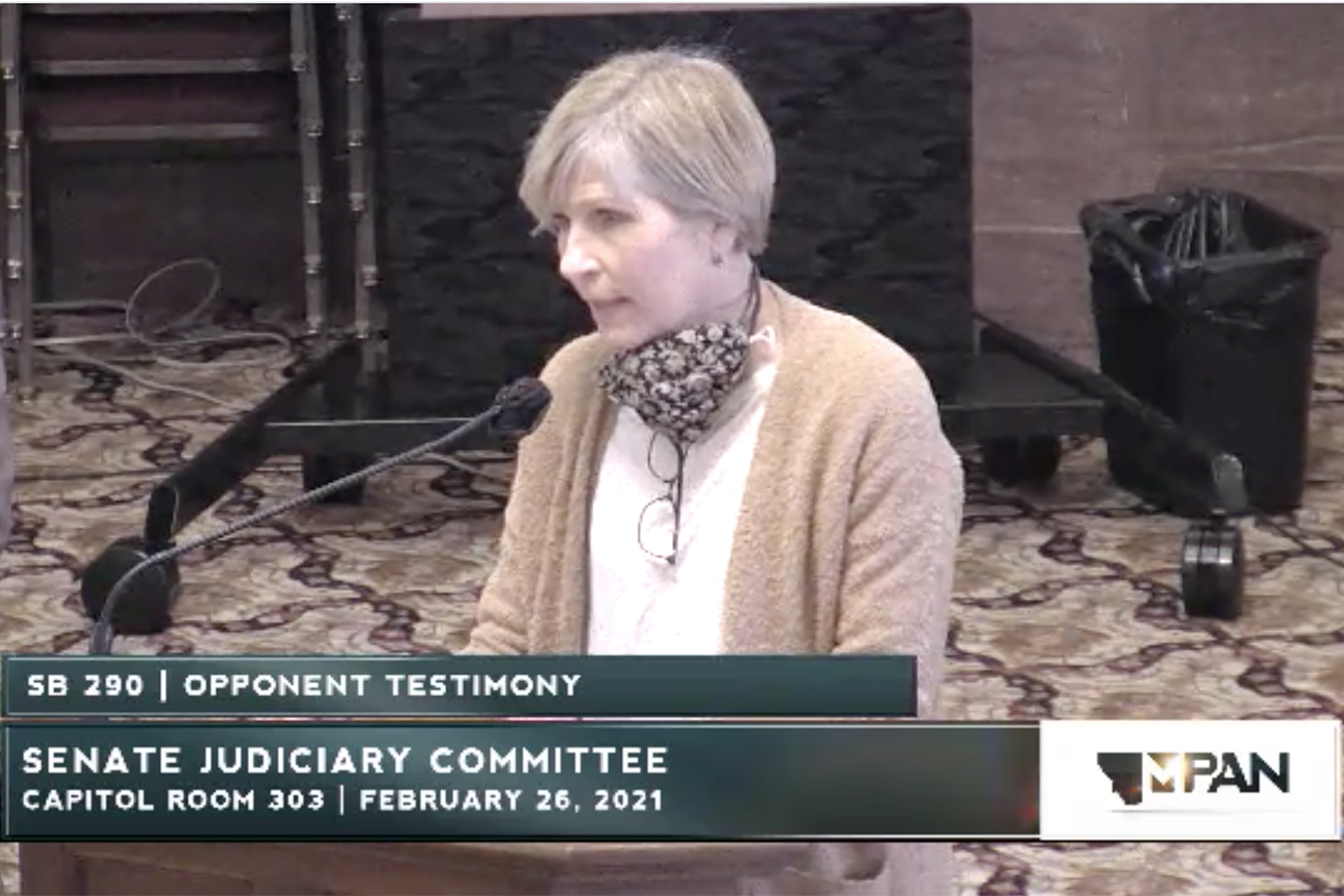 For Roberta King, another one of Baxter’s daughters, the ongoing fight over aid in dying in Montana means she knows every other winter she’ll make the more than 200-mile round trip from her Missoula home to the state capital. King, 58, has testified against all six bills that sought to ban aid in dying following her dad’s case. She memorized a speech about how her dad became so thin after his medicine stopped working that it hurt for him to sit.

“It’s still terrible, you still have to get up there in front of everybody and they know what you’re going to say because it’s the same people doing the same thing,” King said. But skipping a hearing doesn’t feel like an option. “If something were to happen to this and I didn’t try, I would never forgive myself,” she said.